People might think what sake is tatsted with?
In Sake tasting classes or events, I noticed the organaisers use white wine glasses for sake tasting.

For most of people in UK, when it comes to sake drinking in Japanese restaurants, they drink piping hot sake with ochoko from tokkuri.

Tokkuri on the right side of this image 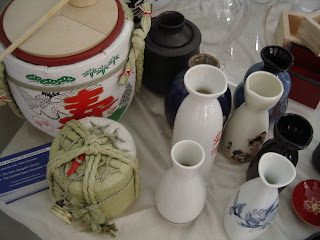 Various ochoko, and the gold one is for cerebration for new year, wedding etc.
The blue glass one is called kiriko.
The ochoco has blue circles, this is called kiki-choco.
In Japan, Sake sommelier is called kikizakeshi.
Kiki means in Japanese is listening.
"Sake tasting in Japan use a range of the senses to get a fuller appreciation of Sake.
The clarity and colour of the sake is assessed with the help of kiki-choco that have two blue circles on the bottom, which can be used to gauge the clarity of the sake.
The clarity of the colour of the sake, taste, and the sound of the sake pouring out, and the taste is the most important sense, and sake tasting is impossible without the sense of smell." 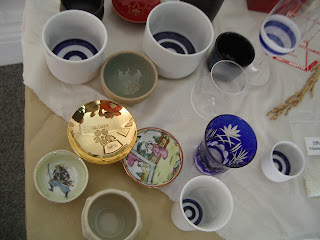 I have received kiki-choco when I was certified as a sake sommelier! 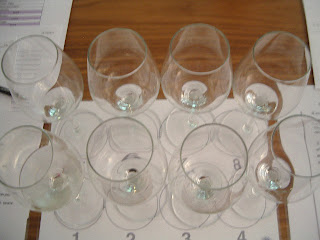 I think it is easy to identify the sense of smell of sake, Aroma. 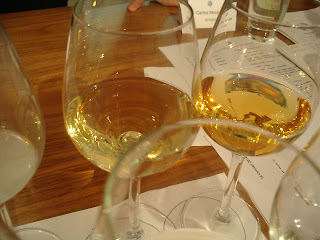 As you could see the colour of the sake are all different. 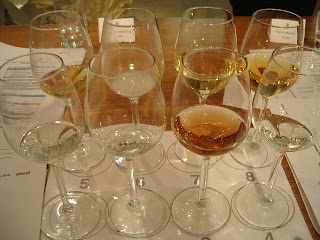 These sake were so aromatic and tastes phenomenal, and I was so impressed with the beautiful taste of
sake, and the precious discovery from my country Japan. 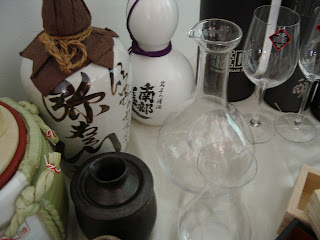 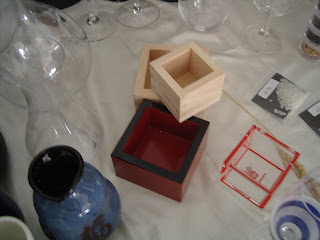 As you've seen the wooden vessels, these are called Masu made of cedar.
Sake was drunk from masu directly, and still used on ceremonial occasions in Japan.
Masu were originally designed to measure rice, and hold 180ml (1 Go)=1合。
Japanese rice cookers have the measurement cup which always holds 180ml.

Hope you enjoyed a little bit of sake tasting, and variety of sake vessels

http://sushiqueen.co.uk  Learn sushi cookery with Keiko, There is Master Sushi cooing class on 29th Sep.
Wish you could Join me!

Posted by Sushi Queen's Food Blog at 3:21 PM No comments:

Who won't resist to taste this delicious Salmon Nigiri sushi?
I  prefer to taste  raw salmon to cooked salmon.
They taste quite diffrent, uncooked and cooked.

Raw salmon is really soft and sweet, it almost melt in the month... 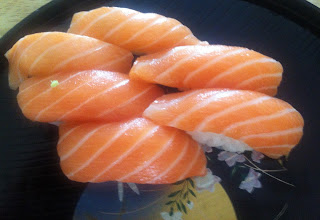 Learn how to slice raw salmon with a chef

Sushi Queen's Food Blog
I love food - sushi :) and wine -sake both cooking & appriciating and eating various kinds of foods, and I like reading reviews about nutrition information. I love Art,too! I love creating Art and appriciating :)

How to make sushi nigiri